An interactive experiment in Pittsburgh 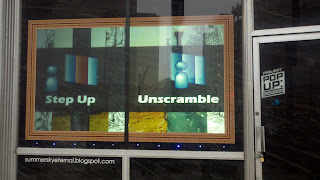 Summer Sky Eternal is an interactive project in downtown Pittsburgh --604 Liberty Ave--utilizing rear projector technology and motion sensitive beams for viewers to wave their hands to unscramble several artists' paintings until the full picture shows up.  Though it is constantly being tweaked, one of my paintings is in the queue to be unscrambled--"Peacocks at Midnight" is the name of the painting and you can find it on my blog.  My friend Mike Honeck, a future Disney Imagineer, spearheaded the project along with a few other graduates from Carnegie Mellon’s Entertainment Technology Center working with the Downtown Pittsburgh Partnership to create an awesome interactive art installation for PopUp Pittsburgh.  Stop by to check it out! 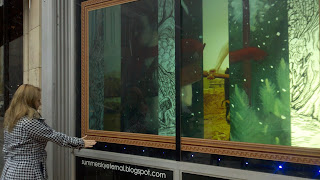 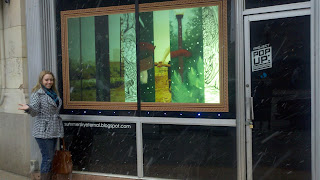 Look at all this snow!! It was sixty degrees the next day, no lie. 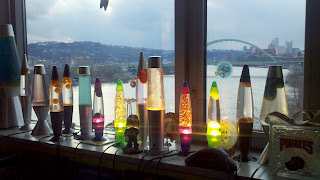 I was out in Pittsburgh for work and got to do quite a lot of sightseeing, along with finally getting to check out the Summer Sky Eternal display- Warhol Museum, Carnegie Mellon's Entertainment Technology Center, Jerry's Records in Squirrel Hill, nightlife in Shadyside, and shopping in the Strip District.  I can't say enough good things about the city and the people, and the energy as a whole. 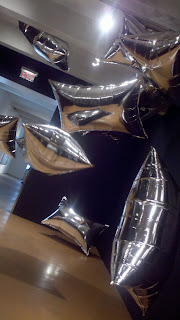 Back home in the studio, I have finally gotten things unpacked, and of course I could not have done it without my wonderful Fiancé and his eternal patience and expertise with getting 100 lb shelving units to stick to a wall in a room that's about as symmetrical as a fun house.  Being up in this room with strange angles and cool textures is leading me to yet another experiement with a texture, this time recreating "brick".  So far so good and my color theory classes from Luanne Stovall, as always, is coming quite in handy. 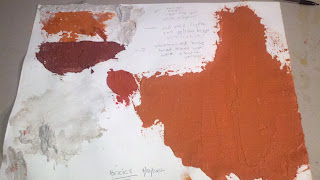 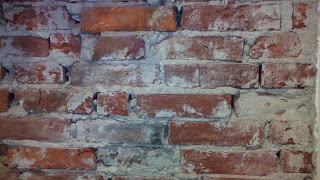